I did that thing again. I forgot to log my progress this week during my development. Okay, I didn't "forget"... I just ended up so busy from handling a fussy baby, and didn't have much time to do anything but code 5 lines at a time every 15 minutes. 😂

Because of this, I unintentionally made lots of changes, which will now be very difficult to communicate through in a blog post. I'll do my best though, and will note down all the important stuff.

First! Life update. I'm writing this in June 23, 2020, and Riley's already approaching her 8th week in this world, and she's starting to become more like a crazy little kid each day. 😎😰

Apparently her personality seems to be quite normal. For fun, I decided to search for the experience with others with respect to 6-8 week old babies. It turns out that peak fussiness happens at 6 weeks, and continues until about 10 weeks, where there begins to be quick drop off. 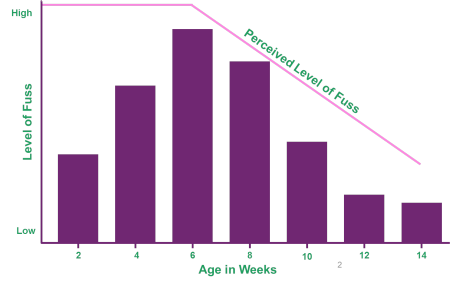 Yeah, it's a random graph I found on the internet, and I'm not sure if that this fussy business is even scientific, or just purely perceptual to the parent craving sleep.

Riley's generally pretty good in my opinion, but she absolutely hates having a wet diaper. The littlest drop can kill her mood! It's just becoming a bit more difficult in trying to soothe her from these things. Holding her in order to soothe has become very difficult in that she no longer likes being held in any position aside from being on her belly. Perhaps it's due to some indigestion.

Because of this, her preference to sleep now is now on her tummy. My wife, and I really dislike this as there can be a risk of SIDS, so we keep nap time supervised where Riley is on her tummy.

The tough part is at night where we want our little girl to be sleeping on her back. As soon as she drops into the bassinet, there is absolute rage! I really want to ask Riley one day if all that crying makes her throat sore, or not. I tried copying her once, and I couldn't even last 30 seconds without the feeling of getting a sore throat. 🤣I suppose that would be a game she can beat me on.

Anyway, I can't wait for the newborn phase to pass. It is tough not being able to do much to satisfy her due to fussiness, and having her cry with no solution. My wife, and I are doing our best, and I think that's what sucks sometimes.

We will all get there together.

I finally bit the bullet, and bought an eGPU. Specifically, the Sonnet eGFX Breakaway Puck RX 560. To point out the obvious, it is an AMD Radeon RX 560 in a Thunderbolt 3 enclosure.

From the data given by Geekbench 5, I am still seeing a significant performance increase going from the integrated Intel Iris 655 graphics to the external RX 560:

This is a 2.34x performance increase! In my opinion, this is one of the more significant upgrades I have made on my computer set up in years.‌

I don't have many quantitative numbers, as I am satisfied with qualitative measurements, I have noticed the following within my everyday tasks:‌

Let's build some additional features to our demo. As of now, we only have the enemy following the player once the player has collided with the enemy. The enemy should be smarter, and should actually being pursuing the upon setting its sights on the player. When the enemy is close enough to the enemy, the enemy should attack the player. Finally, we want to be able to modularize all the logic we have in our enemy game object and make it reusable.

So, we have three basic requirements:

Since I changed way too much code without documenting the process, let's try to actually tackle each requirement one by one...‌

An EnemyClass definition is defined to have 3 types of proximities to be checked against. Attack, Sight, and KeepAway. As mentioned in the the initial design specification, these proximities define the required distances for the enemy take some action on the player.

Proximitymay serve as a POCO that will be an attribute of the Enemy class. I have created this under Jrpg.CharacterSystem.Classes.Definitions.

Now, we can modify Enemy to just receive a Proximity object as a parameter in the constructor.

BattleHelper.cs is a helper class I have created in Jrpg.Unity to detect whether or not the current conditions are correct for an enemy to begin pursuing, or attacking the player.

The approach is the same for all three of these helper methods. The distances are calculated, and checked against the value found in the current Proximity object within the enemy.

Also notice that Cloud, and Goblin have more or less the same properties, and methods which control the rendering of their respective sprites corresponding to the current direction of movement.

A class which extends MoveableCharacter must override OnAwake, and OnStart . These will be called when Start, and Awake are called in MoveableCharacter by Unity. It gives a chance for the child game object to execute its own specific logic at the beginning of instantiation of the object.

Now, let's make changes in the game to make use of our shiny new code. We actually get rid of a lot of repetitive code in our demo as a result of refactoring! We have naturally cleaned up BaseEnemy by moving away all the code to MoveableCharacter. It now is pretty simple, and contains functionality a basic enemy will have:

Now, GoblinCharacter will be much simpler and will contain a class property Character type which refers to the Jrpg.System character entity, and overridden OnStart, and OnAwake methods:

Now, for the most important part of this section: getting the enemy to chase the player! Most of the code is going to be in FixedUpdate, and the changes also include rewriting how the enemy follows the player:

Now that we have somewhat nailed down the orientation of the enemy game object, we must ensure that the enemy is kept at a a fixed distance from the player. We actually don't want Unity's physics system to run, and modify the positions of the colliding game objects (player-to-player, or enemy-to-enemy). This is why we called IsAtMinimumDistanceFrom. If the distance between the player, and the enemy is at, or less than the value defined by Proximity.KeepAway, then the enemy should not move any closer to the player. This will prevent the colliders from trigger between the player, and the enemy, preventing the enemy from "pushing" the player out of the screen (ice skates).‌

Let's see how this works!

We'll now modify MonsterCollision to modify logic for the enemy to attack the player when it is in the proximity for attacking. This is done by checking IsWithinAttackOf and if it it is within the proximity, the logic to enter BattleState.Battle is set within OnCollisionEnter2D. ‌

Then, on every FixedUpdate called, melee attack logic is run if the internal Character is within the battle state for this particular game object.

Note that the enemy will only attack if it's known to be in the battle state where InBattle is true. Most of the logic here stays the same as with previous demos.‌

Multiple Enemies Within the Scene‌

I have also decided to give each of these objects a unique name so that it would be easier to search for specific game objects in the Enemies collection tied to the current scene.

As long as the EnemyInitializer has some priority in execution, the scene should be able to load the enemies on screen before the player has control over their game object.

We will also move the replacer classes for our our debug menu into a built in component in Jrpg.MenuSystem. it could be potentially handy in the future. MenuBuilder reads in JSON files with a structure for the MenuSystem to build menus. Since we don't expect the code to change too much for the game, and it doesn't refer to any game specific logic, we can safely refactor this code out into the Jrpg.Unity component. This refactor is easy as it is just a copy and paste.

Here is a demo of what we have made!

Well, that about wraps it up for this demo. I think it's time we go deep in expanding our menu system to fully support dialogs, on-screen graphics, and other cool RPG-like things.

My plan going forward is to start development in a new demo. Let's make an action RPG like Diablo!