This was completed as a project for my Computer Graphics (CS 418) course at UIUC. The objective was to render a Utah Teapot within skybox, and have complete Y-axis rotation for both the teapot model, and the skybox.

The teapot, and skybox functionality is presented through a web-based application built using JavaScript, and WebGL. This is my first big project using the WebGL API, and my first significant 3D computer graphics project.

Provided, are three modes of reflectance for the teapot:

The web application has a few significant pieces which compose the overall scene:

The application can be demonstrated here: Shaded Teapot.

If you want to dive right into just reading the code, and running the application, you can download the code from the GitHub repository here.

Running npm install is enough to gather all dependencies. To run the basic HTTP server (powered by Express 4) to serve the content, run node index.js. The webserver will be exposed through port 3000.

Navigate to app.html to use the demo. 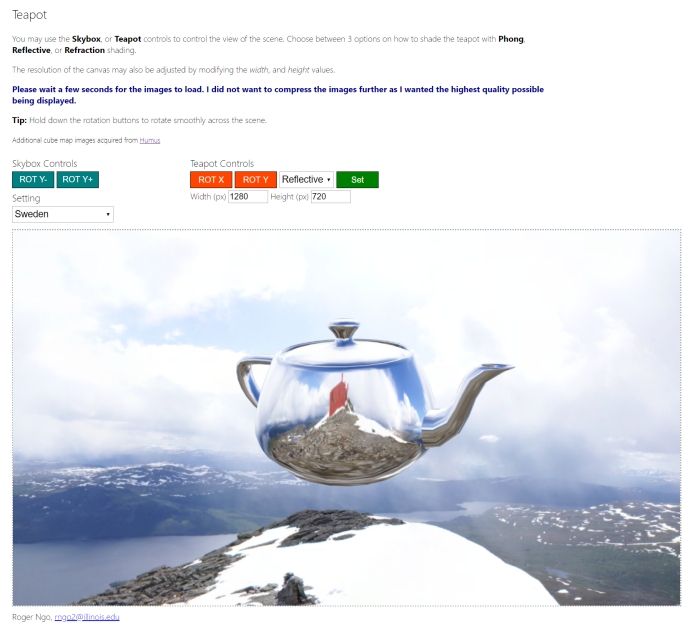 Here are some of the results achieved. I am pretty proud of these.

You may find a high resolution (3840 x 2160) reflected teapot image through this download location. 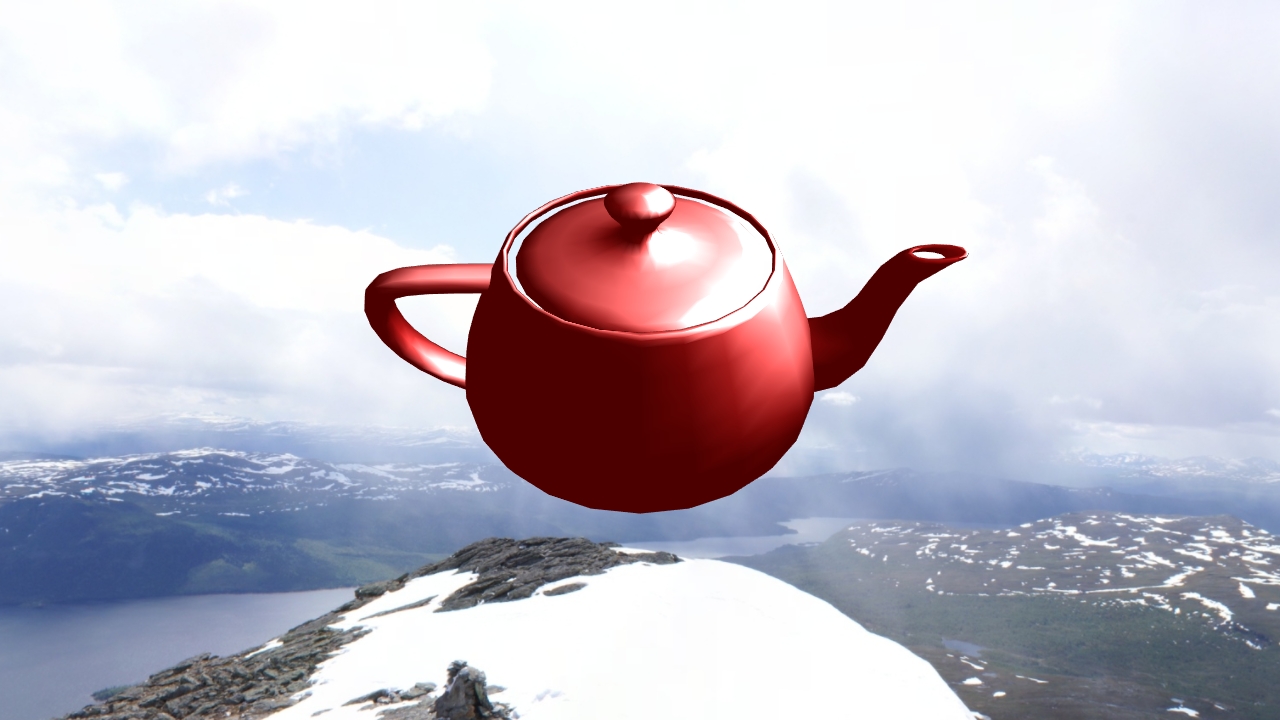 Here are the settings used to compute the Phong reflectance model; 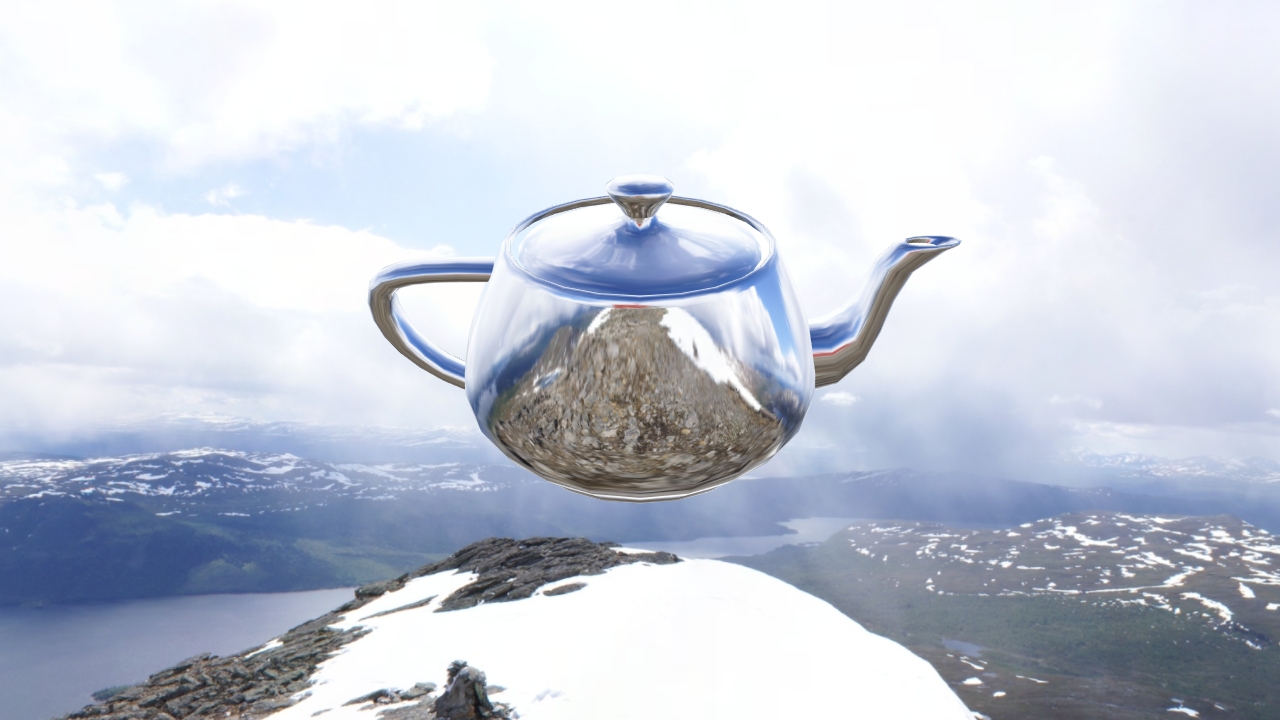 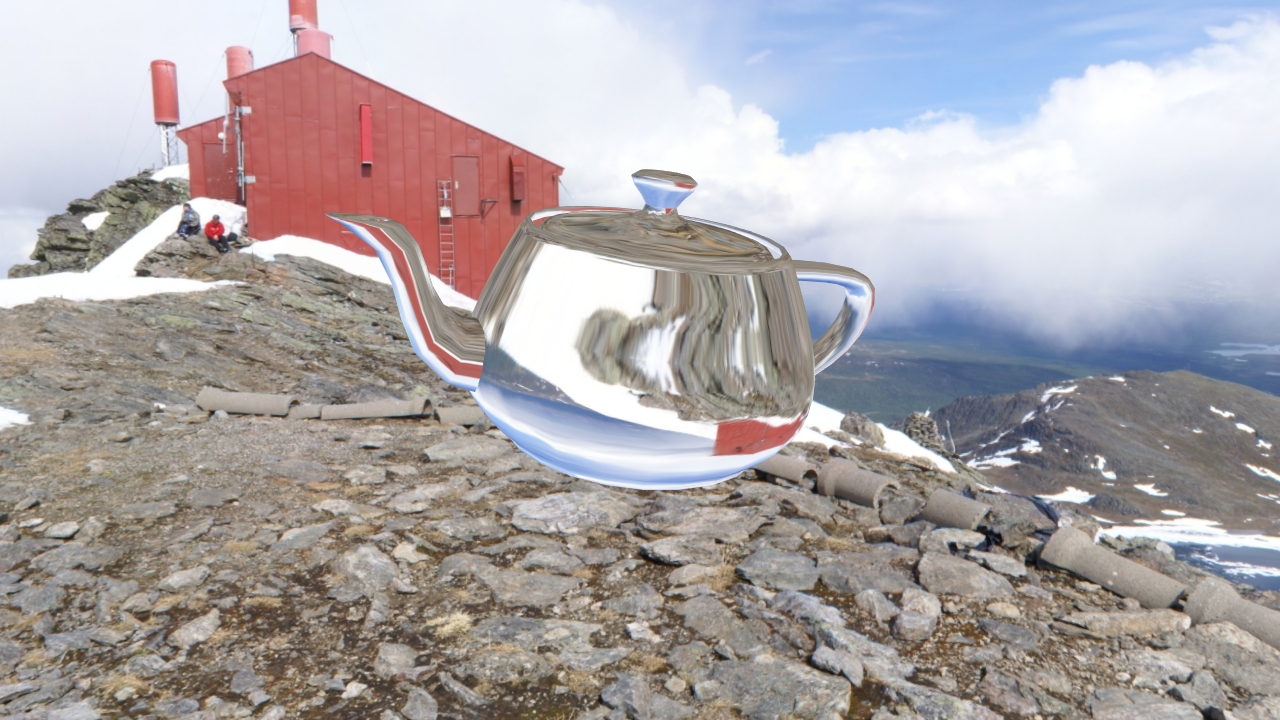 For every reflectance model of the teapot, I had decided to program separate shaders for each model.

This totals up to 8 different shaders which are compiled, and linked through gl-compiler.js.

The WaveFront obj file is documented here, and is pretty easy to understand. The teapot model which I used did not consist of any complex directives, and was just a set of vertices, and faces like so:

I had developed my own utility, face-iterator.js to parse out the obj file, and store it in a custom iterable data structure (with API methods such as next, hasNext, etc).

The data structure itself is an array of objects which contain vertices which make up a triangle. In addition, each element also contains the index of the vertices for which they appear within the obj file.

The sample routine which returns an element is shown:

In order to create an aesthetic render of the model, I had used Gouraud interpolated shading as opposed to flat-shading.

Flat shading takes each face normal, and uses the normal to compute the color for the entire triangle. This results in mach bands appearing on the shape as there is no seamless transition in color.

With Gouraud shading, the average of the face normals which are incident (adjacent triangles) to the current triangle is used instead to interpolate the colors across the surface of the triangle between the vertices. This results in smooth shading as shown in the comparison below:

How do we do this? For the 2D case, we can just take each segment, and compute the normals between each vertex, and obtain the average between them. 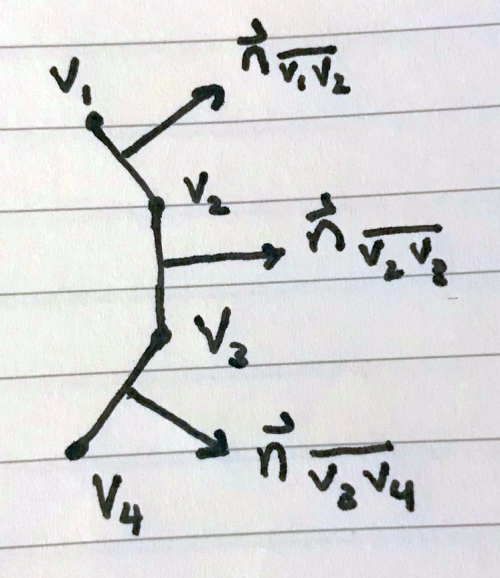 The 3D case is not as trivial. In order to perform Gouraud shading, each triangle face normal is computed. 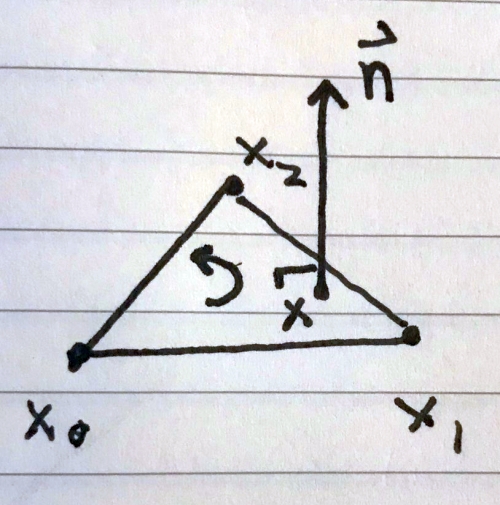 Using each face normal, , the average is computed from all triangles adjacent to the current triangle.

Some data juggling is involved to find out which triangles are adjacent to each other, but it is solved easier by the use of a dictionary, or map-like data structure.

In the case of JavaScript, we can use a plain object with its object properties being the vertex index pointing to the list of normals of the triangles, which contain that vertex.

Here is an example representation of this map structure:

Although more memory is used initially to store the face normals before computing the average of normals, we only need to do this once offline.

The normals will be recalculated using these initial values against a matrix transformation when computing the lighting.

I primarily followed the WebGL fundamentals tutorial on Cube Mapping to build the reflected, and refracted teapot. It was not too troublesome, and found the tutorial to get me up and running very quickly.

For the skybox, the subsequent tutorial on WebGL fundamentals had good enough documentation to sample off of. The only quirk in the tutorial in contrast to the final code is that glMatrix uses targetTo as the equivalent version of an inverse lookAt as demonstrated in the tutorial.

Setting up the matrix was probably the most challenging. There were two parts to this:

One thing to keep in mind is that the camera matrix is inverted after setting the target using targetTo.

The Phong reflectance model can be expressed as the sum of three components:

The specular component of the Phong reflectance model is what gives the teapot the gleam required to make it look "plastic-y".

Given a directional light intensity , the specular component is expressed as:

There are two important components to consider in the specular model:

The following diagrams show the teapot with the lighting components separated:

The camera is configured to look at the axis, focusing on the teapot in the position . The view volume is configured with FOV, and z-clipping from at the near plane, to at the far plane.

This perspective focuses on , with the up-direction at the Y-axis: . The camera matrix uses the eye point , focus point, and up-direction to build the lookAt matrix, and is then inverted to target the teapot.

When the application is loaded, the default view is then towards the -Z-axis.

Overall, this was a very fun project to work on. I learned a lot of computer graphics concepts which I have been wanting to learn for quite some time, but just hadn't found time to! This project was a great motivator for me to buckle down, and learn some basic CG concepts: